The names of all the suggested beverages correspond to the XVIII-XIX centuries. The main part of the name is the type of the drink: erofeich, ratafia, vodka, nalivka (fruit liqueur). As for the second part, which is mostly an adjective that reflect the character of the drink: aniseed erofeich, rowan ratafia, bersenevaya nalivka (gooseberry liqueur), milk filtered lemon vodka.

Erofeich is the Tzar of a Russian buffet. These beverages, being born in the XVII century, existed until the last quarter of the XIX century. They had always been the most expensive drinks that were available only for noble and merchant societies. The suggested erofeiches are classically prepared and represent quarter distillation drinks that have an approximate alcoholic content of 56 % by volume. It is served exclusively from the ice in small and chilled wine glasses of 30-40 ml. Erofeich is swallowed at one gulp without having anything with it at first, one should wait for a particular warming feeling in his stomach.

Classic Russian alcoholic drink of quarter distillation prepared from a Siberian caraway. It is an ideal aperitif for a Russian buffet. Served from the ice.

Classic Russian alcoholic drink of quarter distillation prepared from a balm anise. It is an ideal aperitif for a rich Russian buffet, an accompanying drink that perfectly comes with nourishing and fatty plates. Served from the ice.

Classic Russian alcoholic drink of quarter distillation prepared from rowan. Can act as an aperitif (served from the ice) and antrame (chilled, before and after dish es of wild bird)

Classic Russian alcoholic drink of quarter distillation based on flowers and young sprouts of St. John`s wort, collected near the Mana River (Eastern Sayan Mountains). In the XVII century, alongside with wild orange and lemon vodkas, zveroboynaya vodka was the most popular alcoholic drink on a Russian table. Due to St. John`s wort it contains a complex of natural substances, giving a strong anti-depressive effect. It is an ideal beverage for a meal that perfectly develops with plates prepared from beef, veal and fowl. It has a specific floral-and-herbal aroma and a herbal-and-pepper taste. Served slightly chilled.

Prepared infusion on milk and whole lemon to the last slow distillation. The aroma and taste of lemon vodka, and finish – cream. Served chilled or on ice. Good maintenance of dishes with a delicate taste and fish broths. can be used as an aperitif.

Traditional russian vodka. Prepared of the horseradish and fresh lemons. Suited to fish, cold boiled pork. Served from the ice.

This is balsamic vodka made of different types of herbs, collected in the highlands of eastern and western Sayan mountains in Syberia. Perfect end to the evening as a digestive. Served from the ice.

They represent vodka prepared from different berries, fruit and herbs. Here are some peculiarities of the production: 1) Only whole berries are used, which are not cut, undamaged, with intact peel; 2) During the preparation, depending on the temperature, on has to take the time into account. For instance, strawberries have to be drawn at a temperature of 25ºC during 20 hours, otherwise the liqueur won`t be fragrant. Every object of the drawing requires its own time. 3) The liquid is poured out without damaging the fruit and berries. Wringing is not used during the nalivka production. 4)The derived infusion is fixed with a thermal processing, clarified by sedimentation and poured into bottles without filtration.
There is a particular peculiarity of classic Russian nalivkas (they are also called «Russian liqueur»), they can develop their taste being in bottle, cultivating it within the time.
The alcoholic content of nalivkas differs from 14 to 25% by volume. Thy are a wonderful dessert both alone and as an accompaniment for any dessert plate.

Nalivka based on an alcoholic drink of double distillation. It is prepared from blueberries, picked up near the Eastern Sayan Mountains. A wonderful independent dessert and an accompaniment for dessert plates, based on cream.

Nalivka based on an alcoholic drink of double distillation. It is prepared from cranberries, picked up in swamps of Eastern Siberia. A wonderful independent dessert and an accompaniment for dessert plates (not sweet).

It is prepared from honeysuckle berries, picked up end of June in the Eastern Sayan Mountains. An independent dessert and the basis of the sauce for French duck. That is a good match for parfait and full-cream ice.

Nalivka based on an alcoholic drink of double distillation. It is prepared from bilberries, picked up in an Alpine zone of the Eastern Sayan Mountains. A wonderful independent dessert and an accompaniment for dessert plates. 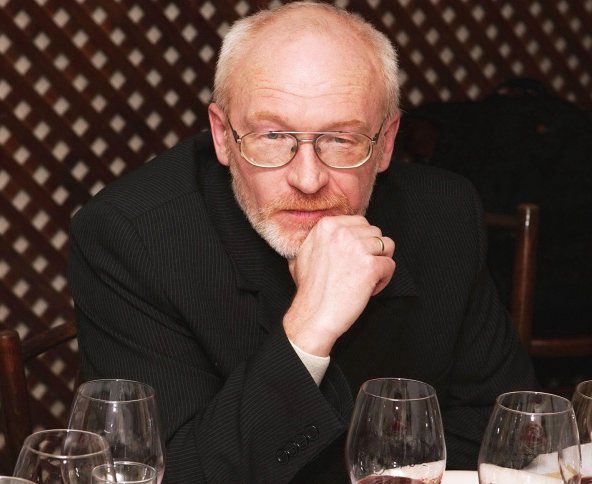 Igor Vladimirovich Shein is a famous wine technologist, restaurant critic, taster and gourmet. A man who made one of the largest contributions to Russia for the Russian table culture. Thanks to him, the recipe of the Russian buffet, which included the famous drinks served to the noble table from the time of Peter the Great, was recreated. The Suitcase restaurant presents its collection of unique drinks that made up the traditional Russian buffet: yerofeiichi, ratafia, vodka and liqueurs.
heritagerusse.com